There has been a considerable amount of debate deciding whether Angular or React is the better choice for front-end development. According to stateofJS 2018, React is used by 65% of web developers, and 19% of people are interested in learning it. Angular isn’t as dominant, but it’s hanging in there: 24% of people use Angular and 34% of developers are keen to learn it as well.

As a web developer, you have to continuously evolve with the latest technology trends and be self-aware at the same time; sticking to one for too long or shifting too fast can harm your professional development. So, before making the decision to shift or settle down with one technology, you need to first understand the limitations and pros and cons of the technologies you are thinking about changing to.

What exactly is a Framework?

A software framework includes standardized, pre-written code, that makes the development of certain functionalities quicker and easier. Since the framework architecture controls coding, you have less coding to do.

What is a Library in a Framework?

A library is a collection of prewritten code blocks that make development faster and easier. It’s important to find the right library for the job: certain libraries will be better-suited for different projects and for different developers, and it’s important to understand what you want and where you’re coming from before you make your choice.

The most significant difference lies between the framework and a library is how they interact with the code you’ve written.

Also, there’s the Inversion of Control at play here. A library is just a collection of premade elements, ready for you to do what you want to them. You make calls to a library, but you still have total control over the application flow.  A framework flips that on its head; it provides places for you to modify and customise but it is still in charge of what goes where and you need to learn to work within it. For something to be considered a framework, it needs to show inversion of control.
Angular:

This front-end web application platform is TypeScript-based and open-source, with an MVC architecture. It’s not hard to see how it has become so widely used. With the release of Angular 5, Google also added support for several progressive web apps.

React is a JavaScript library created by Facebook, and maintained by its creators and a large community of developers. It does one job exceptionally well: building user interfaces. On top of the pure React library itself, there are three different versions of React known as React-devtools, ReactJS.Net, React Native. React Native is popular among web developers for creating Native Mobile apps.

While React as a JavaScript library may not be enough, when combined with other libraries you can find a powerful solution to many problems.

React vs Angular: Where the Differences Lie

Data Binding is essential when it comes to frontend web development. It comes in two forms:

The Angular DOM uses the browser’s DOM, while React uses a virtual DOM. The virtual DOM is a simplified version of the DOM in which you can quickly change any element without rendering the whole DOM—saving a lot of time and effort. 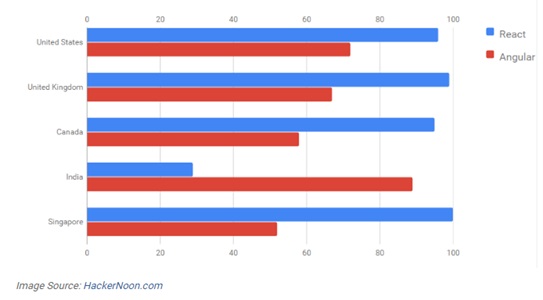 AngularJS is based on a component style architecture but has many similarities to the MVVM (Model View Viewmodel) architecture. It comes with an exhaustive list of tools and features like data link, routing, navigation, HTTP implementation and more.

React, on the other hand, is not a full framework but rather only a library, and it would consist of the “View” part of MVC (Model View Controller) architecture. You’ll need to use it with other libraries like Redux and Flux as a controller or react-router for navigation.

No one knows better than the developers themselves who have worked with both Angular and React and have first hand experience with the strengths and weaknesses of each. While Angular is easy to set up, it takes a huge amount of time to deliver projects. Why, you ask? Because it uses a lot of unnecessary syntax for the simplest of things that increases the overall coding time.

The Bottom Line
Now that you know what makes Angular and React different from each other in their core, it makes sense to say that both frameworks work best in different requirements, let’s discuss:

React takes longer than Angular to set up but helps in creating projects and building apps fast. React comes with the liberty to add new features via several libraries, unlike Angular, though this is because React lacks model and controller components. React is ideal for simple, computation-free apps. For any personalized solution, React would be the apt choice because of its versatility. The best-case scenarios for React are:

Dynamic Applications: Thanks to its Virtual DOM, React is a great option that can quickly incorporate and ‘react’ to the changes made in the view by users.

Single Page Apps: React is fast when it comes to changes made to the content. It shows all of the changes without having to reload the current page.

Native Mobile Apps: For creating a native mobile app, there’s nothing better than React Native. It helps with creating apps written in JavaScript with comparable performance and features of native apps.

The applications that Angular works best with are:

Cross-platform mobile applications: Angular was created for the very purpose of providing support for mobile apps, and it provides and easy to use and efficient toolkit for doing so.

Progressive or Hybrid Web Apps: When Angular combines with Ionic 2, it becomes a perfect tool for building hybrid apps.

As Angular and React each have their own strengths and purpose, it’s difficult to state which is better for beginners. If you’re just starting out then we would recommend you to learn the functionalities of both and adapt according to the ecosystem being used by project managers and developers across the world.

Of course, the debate is bigger than Angular and React. In 2019, there’s a whole host of JS frameworks with different pros and cons.Vue has really shot up in the last few years, and a number of smaller frameworks like Ember still have a lot to bring to the table.

If you’re looking to get better as a JS developer, there’s no better way to do that than in the field—it’s important that you keep your eyes peeled for JavaScript developer jobs. You’ll learn by doing, and make money doing it.

How is search engine optimization helpful for a business?

The PDFBear Way: Fast, Accurate, and Reliable Tools it Offers

PDFBear Step By Step Guidelines: How To Use PDF to WORD Converter For Free

Details And Instructions On How to Use Some PDFBear Tools

Be Productive: 4 GogoPDF Online Tools You Can Use at Work

View all posts by Clare Louise →